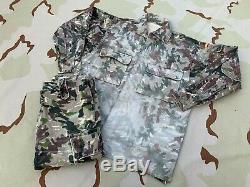 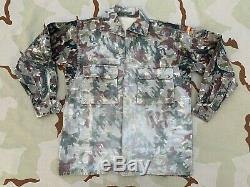 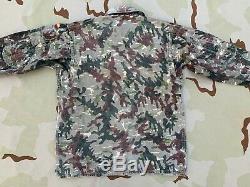 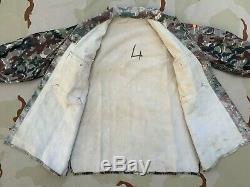 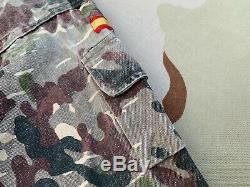 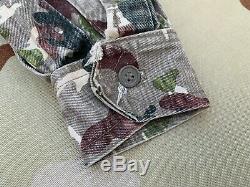 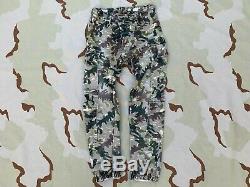 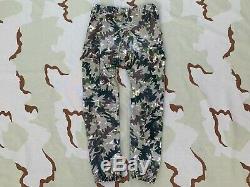 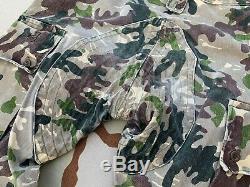 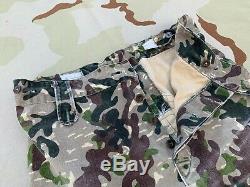 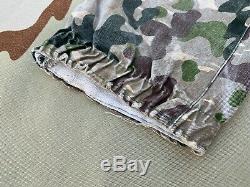 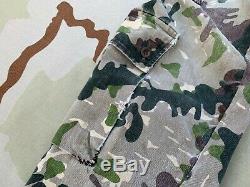 By the elite units of the La Legion. Ome very similar variants w. Lso distributed to the special operations units of the spanish army and air force, s. Uch as Compañía de Operaciones Especiales -COEs-, Brigada Paracaidista -BRIPAC- or Escuadrilla de Zapadores Paracaidistas -EZAPAC- since the late 70's to the 80's. This camouflage was inspired by the leibermuster used by the Germans during the end of World War II, that an approach was also adopted by other nations after the war (such as Switzerland) and is characterized by amoeba-like high contrasting red and dark green shapes mixed with olive green on a tan background and disrupted with horizontal white "flecks".

Several generation of the uniforms exist and this one appears to be the second iteration, with some minor changes. The uniform consists of a heavy canvas style fabric and is very well made. These are uniforms from a bygone era, with so many features and a high complexity, something that was surely time-consuming to manufacture and won't likely find today in the era of disposable synthetic uniforms and automated manufacturing. The shirt is packed with pockets and features: on the front are the two horizontally chest pouches with lid and buttoned below.

Have been removed with the purpose of eliminating the full color (halberd, arquebus and crossbow crossed and on these weapons a royal crown) logo embroidered on them. Ossibly uniform model of between the late 70's and early 90's. The pants has four pockets distributed on each leg, one on the thigh and the other on the calf. The upper pockets are closed by four buttons, something usual in the pants of that time, which is inherited from M-69. However, in the lower pockets they are closed by two buttons.

It is the first generation model, later, in the last design of the early 80s, the calf pockets are eliminated. For that reason these are more rare and hard to see.

The uniform is heavy used condition but with no abuse. There are no stains, other damage, all buttons are original. The colours are well worn. Due to crawling on the ground.

He pants have been arranged to narrow the calf area, and have some stitches and sewing points. The dimensions are as follows. Armpit to armpit - approx. 50 cm (19.6 inch). Armpit to sleeve cuff - approx.

The item "OLD Spanish 1970s M-76 Rocoso Amoeba Legion Extranjera Uniform Shirt Pants Spain" is in sale since Tuesday, August 6, 2019. This item is in the category "Collectibles\Militaria\Surplus\Uniforms & BDUs". The seller is "specwarkit" and is located in Western Europe. This item can be shipped worldwide.