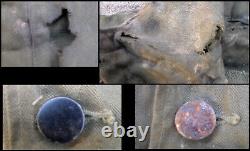 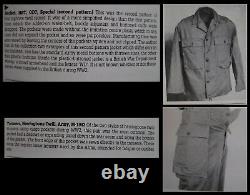 There is one shirt, and two pair of pants. The shirt is a Second Pattern H.

It is size "42R" and is dated 1943. The shirt still has the Gas Flap. The shirt has some dirt stains, rip damage, and oxidation to the buttons.

The buttons on the shirt are simple black buttons, that were also used on tent shelter halves. The two pair of pants have the Army star "The Glory" buttons. The Star Burst logo on the Army buttons is the logo that goes above the American Eagle's head on the 1902 Tiffany designed American Eagle Seal of the United States.

The buttons on the pants are in better condition, with less oxidation damage. One pair of pants has rip damage like the shirt. Both pairs of pants have dirt stains.

Only the one shirt, and two pair of pants are offered for sale. These items are old and in Used Condition with wear damage from use.

There is sun fading, dirt stains, scratches, dents, paint loss, rip hole damage, frayed edges, and oxidation to the metal parts. There is a lot of soil dirt on these fatigues. These items are no longer in the perfect condition that they once were in the day they were originally manufactured. These items are both damaged from having been used, and damaged from being old. Time slowly destroys old things.

For Legal reasons, the items in this listing are stated as "Used Condition". What is a "Used Condition" item? It is an item that is in "Poor Terrible Condition". They are better condition than "Dug Relic Condition" items. Items are no longer like how they were the day they were first manufactured. Items have been used by someone Decades ago in another Century. Items will have defects and damage from having been used. The older something is, the worse the condition will be. Wool items will have Moth holes.

Expect there to be Mildew and Mold damage stains. Expect buttons to be broken or missing. Expect zippers to be broken and non functional. Expect size tags to be missing or damaged. Expect leather items to be dried out and cracked.

Hats will be crushed and bent out of shape. Do not expect clothing to fit you, it is not your size. Expect oxidation and rust on the metal parts. Expect items to be faded from having been exposed to sun light. Expect metal items to have dents, scratches, and paint loss.

Expect items to have microscopic fractures when looked at under a microscope. Expect Electronic items to no longer work or be functional. These items are old and things slowly get destroyed by time.

Please do not expect something in "New Condition", or "Good Condition". These items are in "Used Condition", and are Relics from another Century. The vintage items I list for sale are not wearable clothing, or usable items.

These items are old and damaged from use. The item was rough weighed in an open box. I have mailed items in the past to: Brazil, United Kingdom, France, Italy, Netherlands, Australia, Canada, Malta, Hungry, Belgium, Taiwan, etc. The local Post Office gives those boxes out to use. They have lost items I have mailed.

It takes between 3 to 5 days for funds to transfer to my bank account. I'm trying to be 100% up front and honest. I mostly only leave other people feedback after they leave me feedback. Chances are, if you don't leave me any feedback I'll probably not leave you any either.

I try to be 100% Honest and show photos and describe items the best I can. Items tend to be old, used, and as is. I don't want to talk to anyone at all on here. I will try to bother to be nice, and answer your question.

If I see a size marking on an old Quartermaster Tag, I will try to show a photo of it. If I say that I do not know the size, than please do not waste both of our time by asking about the size of an old militaria collectable. They are old damaged relics in poor condition. I also tend to have items packaged away to try and keep moths from eating them.

I only dig them out if they sell and need to be mailed. Please do not ask me to take more photos, because I won't take any more photos of things I have already stored away. The item "Old Relic US Army WW2 era (HBT) Herringbone Twill Fatigue Shirt & Pants (USED)" is in sale since Saturday, October 23, 2021. This item is in the category "Collectibles\Militaria\WW II (1939-45)\Original Period Items\United States\Uniforms". The seller is "clayandmilitaria07" and is located in Stockton, California. This item can be shipped to United States.