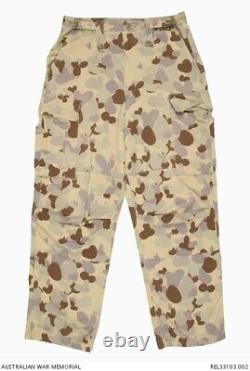 DPDU An Australian soldier wearing DPDU in Afghanistan. He utilises the latest version of the DPDU uniform.

Officially named DPDU (Disruptive Pattern Desert Uniform), a DPCU variant designed for desert conditions using different colours, was first tested in 1998 at the Woomera Missile Test Site in South Australia. The first version, from 2001, was printed in 3 colours (brown and grey on a tan background) with 1/3 of the normal pattern missing and rushed into issue for the Australian Special Air Service Regiment deployed to Afghanistan as part of the International Security Assistance Force (ISAF). A second version from a year later used 5 colours: brown, lime green, grey, and a very light blue on a tan background. This was again issued to SASR in Afghanistan after the first version was found to be too light in colour for the terrain. This was followed by a third issue in: brown, grey, very light blue and purple on a yellow background.

The cut was changed in the shirt with the bottom pockets being omitted and placed on the sleeves. This was replaced in 2006 by the current-issue DPDU. The colours remain the same as the previous DPDU. Changes to the uniform include repositioning of shoulder straps to the chest, the changes of the chest pockets and cargo pockets from the button-fastened flap of the pocket to zips and minor changes to the sleeve pockets. This the current type issued to all ADF personnel serving overseas in arid/desert regions such as Iraq.

I Wore these whilst on deployments overseas and its a very good uniform and stood up to all conditions and rigors as an ex soldier I fully recommend this uniform as its tough and has plenty pockets and room store stuff on the body be good for hunter types or out door types. This item is in the category "Collectables\Militaria\Other Eras, Wars". The seller is "mawo-1635" and is located in this country: AU.