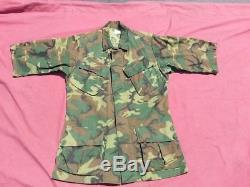 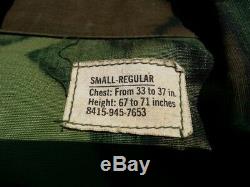 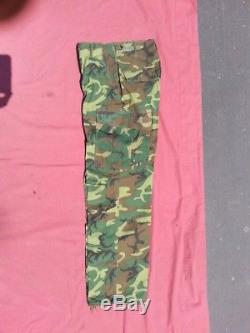 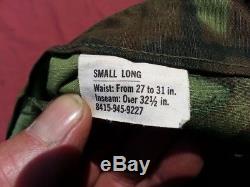 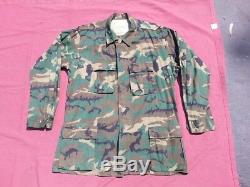 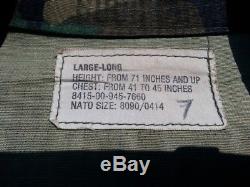 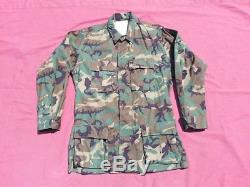 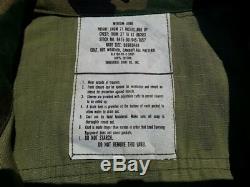 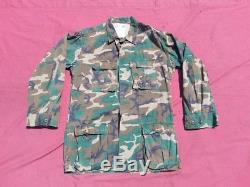 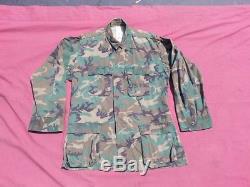 I'm listing these as a group to get them available to buyers. Later, I will list them individually and cancel this listing.

Some buttons may be missing. This pattern, often copied and still in usage today by other nations, is generally referred to as the ERDL camouflage pattern. Although initially shelved, the pattern was revived for testing in 1962, and several hundred ERDL tropical combat uniforms were sent to Vietnam for evaluation by USARV in 1966. The fabric was given full infared control treatment. Beginning in 1967, ERDL camouflage tropical uniforms began seeing service with reconnaissance and Special Forces personnel deployed to Vietnam.

The uniforms were also highly favored by the US Marines, and were obtained in limited quantities by Australian. Special forces teams deployed there. Personal accounts from veterans and personnel from the postwar period suggest the uniforms were often referred to as leaf. " pattern and even as "flower power jungle fatigues. The original ERDL pattern was predominantly green printed on a cotton poplin fabric; later versions were printed in a new "ripstop" poplin fabric. The green dominant design has often been labeled a "lowlands" pattern, referring to its suitability as camouflage in the lush, lowland regions of Southest Asia. Notable to the original ERDL camouflage is the fact that printing was often inconsistent, with rollers frequently experiencing slippages that resulted in overprinting of one or more colors in the pattern, leaving a shadow-like outline to many of the shapes in the design. As a result, several variations can be observed in fabric batches produced over the years. Also released in 1968 was a predominantly brown variation of the ERDL pattern, consisting of mid-brown & grass green organic shapes (the ratio being reversed from the green dominant) with black "branches" on a khaki-tan background. This version has often been labeled a "highlands" pattern, referring to its suitability for application as camouflage in the rocky, mountainous regions of Southeast Asia. As with the green-dominant ERDL pattern, roller-slippage during the printing process frequently resulted in shadows surrounding the primary shapes. A variation of the pattern was also printed on cotton sateen fabric for an experimental camouflage version of the standard US Army OG 107 third series uniform. More Pictures here . Five two three, five zero three one.